If working with a non-kit SOM, there are additional steps required to build this release for your configuration. Please view the notes in the Building the BSP from Source and Built Images sections for the applicable differences. For each SOM configuration there may be a required change to the Linux dts, the yocto MACHINE value, and the output images.

Use the following as a reference for the connector interfaces on the phyCORE-AM57xx Rapid Development Kit that will be used in this Quickstart. 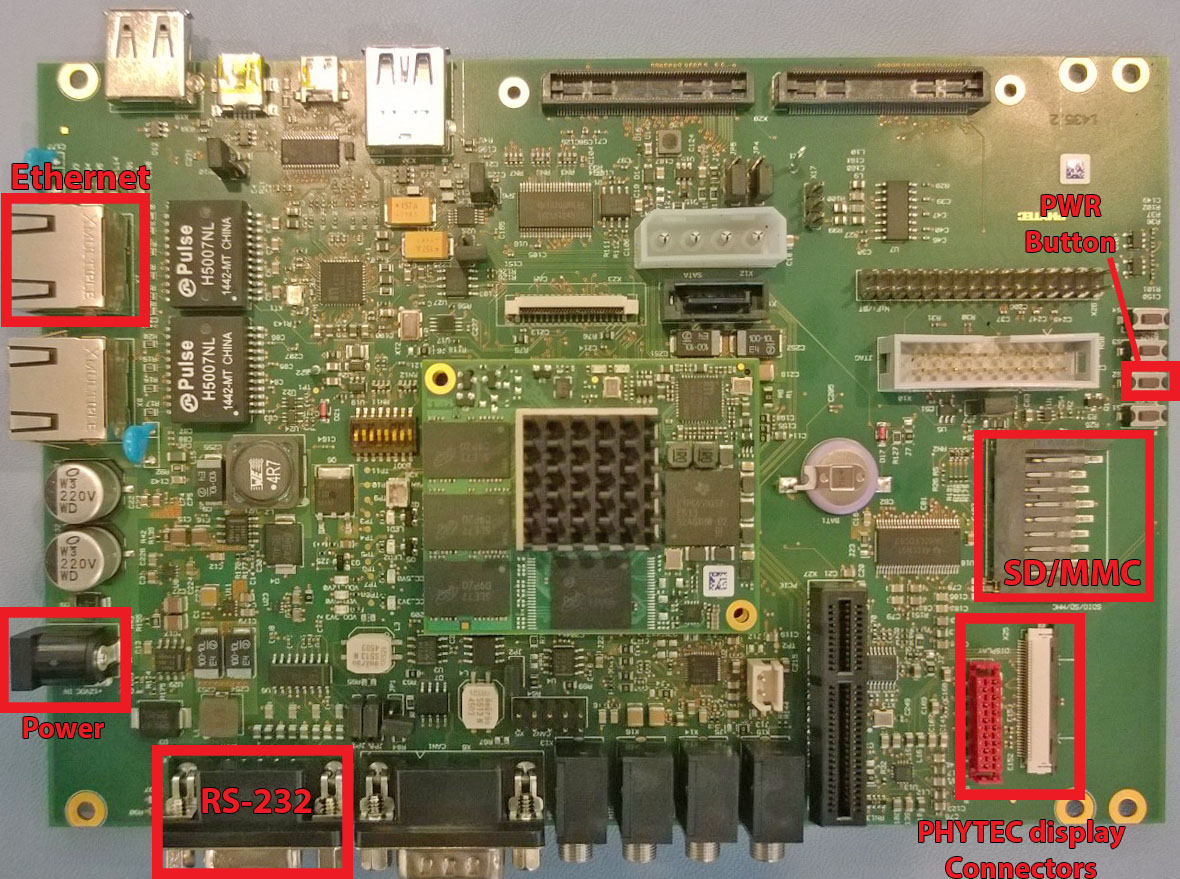 The section was designed to show you how to boot the phyCORE-AM57xx Rapid Development Kit with the pre-built demo images. Before starting the following steps, please Create a Bootable SD Card with the release images from PHYTEC's Artifactory, then configure the board to boot from SD/MMC with the help of the Boot Configuration how-to guide. If needed, you can flash your image to eMMC by following the Flashing Images to eMMC how-to guide.

The above is the recommended package installation for development on a Ubuntu 16.04 LTS Linux distribution. For a breakdown of the packages as well as a list of packages required for other Linux distributions, see the "Required Packages for the Host Development System" section in the Yocto Project Reference Manual: http://www.yoctoproject.org/docs/2.2/ref-manual/ref-manual.html#required-packages-for-the-host-development-system

Create a directory which will house your BSP development. In this example the BSP directory is /opt/PHYTEC_BSPs/. This is not a requirement and if another location is preferred (ex. ~/PHYTEC_BSPs) feel free to modify. We recommend using /opt over your HOME directory to avoid errors attributed to ~ syntax as well as the sudo requirement for the root filesystem and automation package building. We also recommend creating a package download directory (yocto_dl) separate from the yocto tree (yocto_ti), as it makes resetting the build environment easier and subsequent build times much faster.

Run the following commands to install the Linaro Toolchain:

Replace MACHINE=am57xx-phycore-rdk in all of the build instructions with the appropriate MACHINE for the SOM configuration found in the Yocto Machine Configuration Table section of the latest AM57xx BSP release notes.

Run the Yocto build directory setup script. The TEMPLATECONF variable is used to set the source of the local configuration files (conf/bblayers.conf and conf/local.conf), which are located in the meta-phytec layer:

Open the build/conf/local.conf file using your favorite editor and modify the the download directory to:

Be sure to save your changes to the local.conf file before closing.

The setup is complete and you now have everything ready to start a build. This BSP has been tested with the arago-core-tisdk-image and it is suggested that you start with this image before building other images. Alternate images are located in various meta layers at yocto_ti/sources/meta*/recipes*/images/*.bb. They can be found using the command bitbake-layers show-recipes "*-image*" in $YOCTO_DIR/build/.

The default build target is arago-core-tisdk-image, which includes all TISDK demos and support.

If building for am5726-phycore-rdk or am5716-phycore-rdk, the video and graphics support will be removed from the output regardless of the image target as am57x6 hardware does not support these features.

The following will start a build from scratch including installation of the toolchain as well as bootloader, Linux kernel, and root filesystem images.

If working with a non-kit SOM, select it in the Yocto Machine Configuration Table and use the device tree files mentioned in the Kernel Device Tree File column.

All images generated by bitbake are deployed to $YOCTO_DIR/build/arago-tmp-external-linaro-toolchain/deploy/images/<machine>: