If working with a non-kit SOM, there are additional steps required to build this release for your configuration. Please view the notes in the Building Images from Source section for the applicable differences. For each SOM configuration there is a required change to the build configuration layers file and the yocto MACHINE value.

This Quickstart provides you with the tools and know-how to install and work with the Linux Board Support Package (BSP) for the phyBOARD-Zeta. This Quickstart shows you how to do everything from installing the appropriate tools and source, to building custom kernels, to deploying the OS, and exercising the software and hardware. Additionally, gain access to the SOM and baseboard schematics for the phyBOARD-Zeta by registering at the following: http://phytec.com/support/registration/. 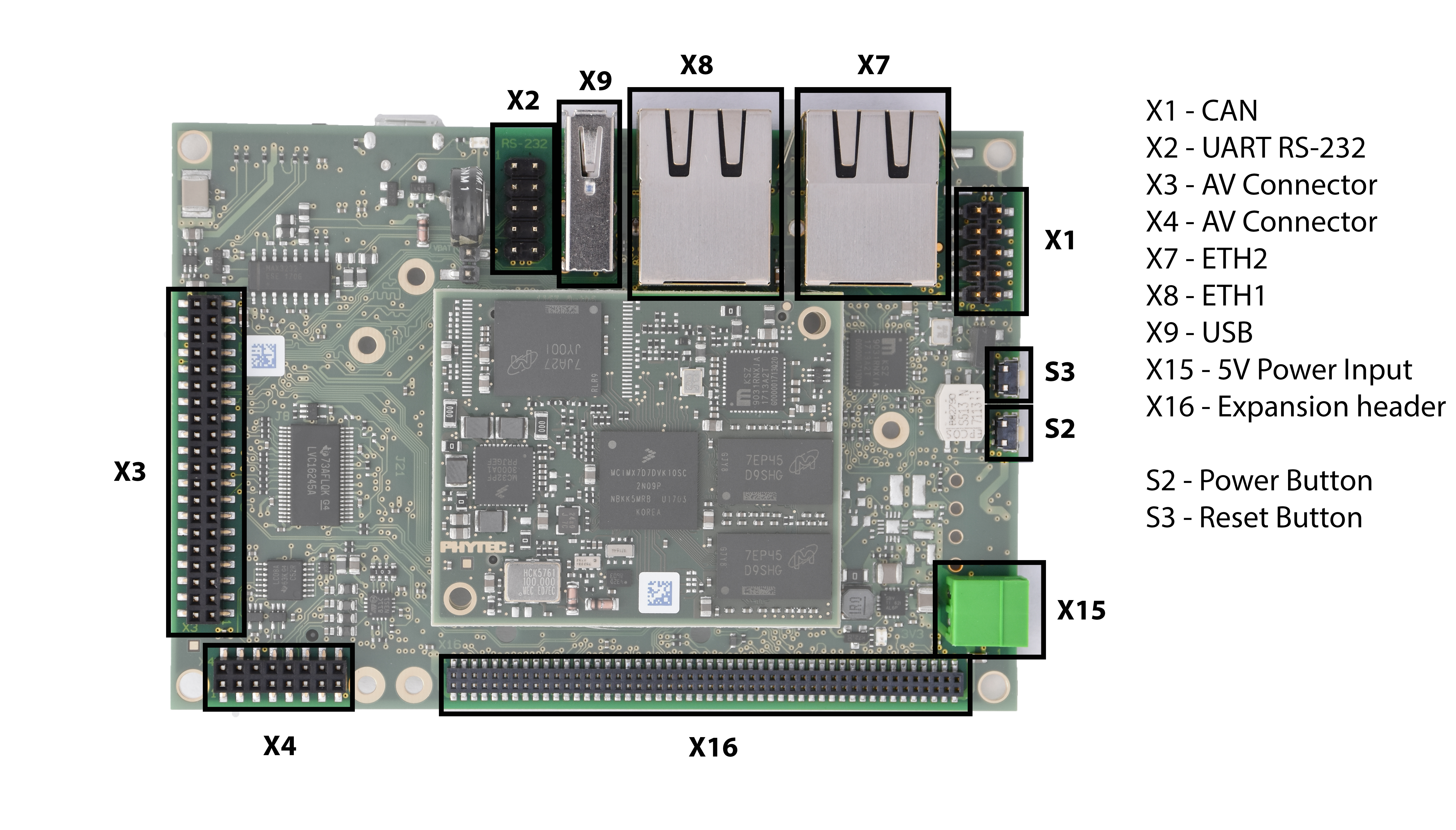 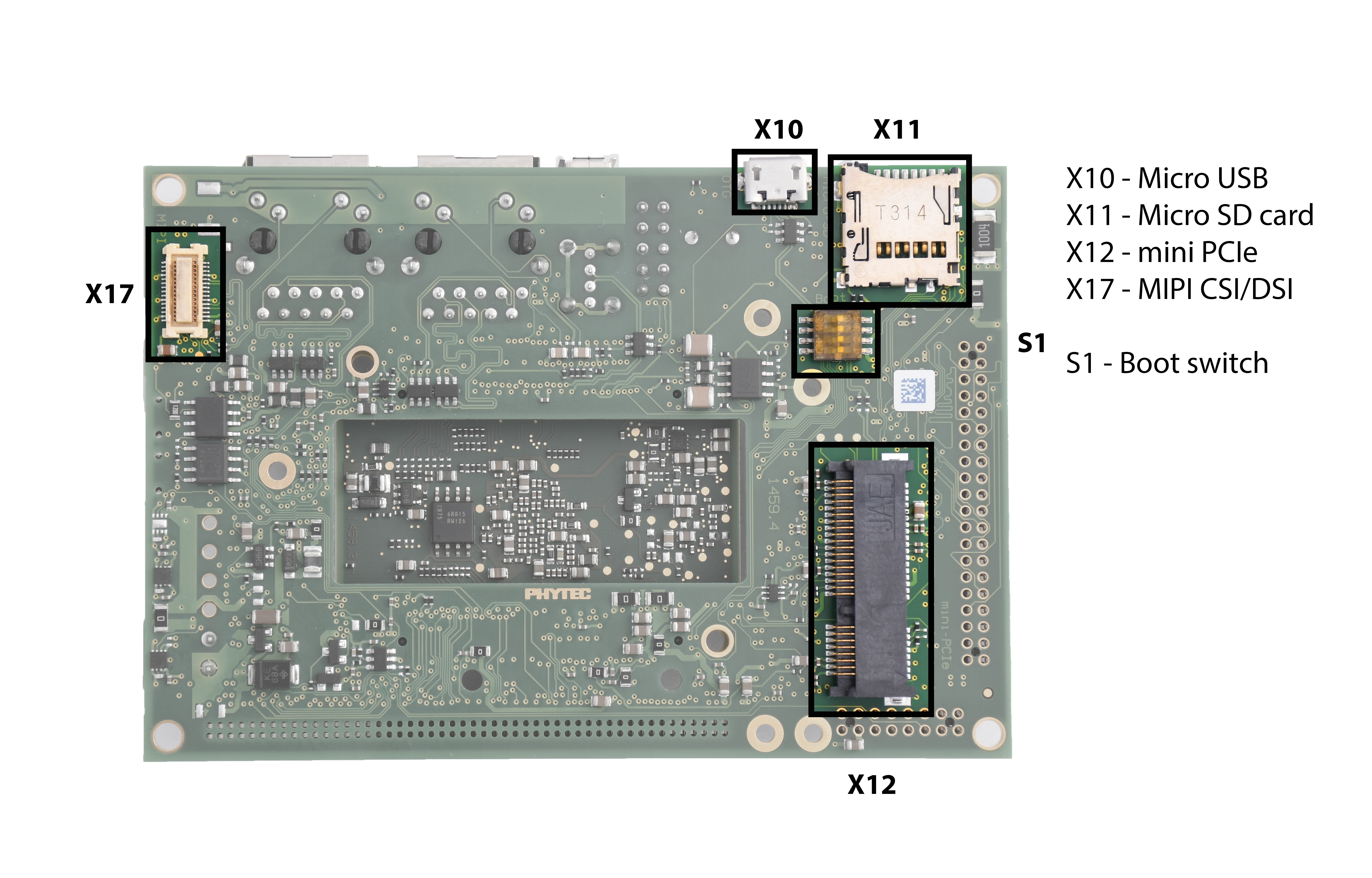 Use the following images as a reference when connecting:

See Release Notes for information regarding supported Yocto machine configurations, and replace <Yocto Machine> in the steps below with the appropriate machine for your hardware.

This section explains how to build your BSP from source.

The above is the recommended package installation for development on a Ubuntu 16.04 LTS Linux distribution. For a breakdown of the packages as well as a list of packages required for other Linux distributions, see the "Required Packages for the Host Development System" section in the Yocto Project Reference Manual

Modify the DL_DIR variable in build/conf/local.conf to use your new download directory:

In order to build certain packages included in the FSL meta layers, you need to accept the NXP EULA at '$YOCTO_DIR/sources/meta-fsl-bsp-release/imx/EULA.txt'. Please read it and if you accept it, add the following in build/conf/local.conf:

If working with a non-kit SOM, please expand the content below for additional instructions.

Non-Standard Kit SOM machine configurations are included in the Yocto layer meta-phytec-extra. To include this meta layer in the build, add it to the build/conf/bblayers.conf file:

Not sure whether your SOM is part of a standard kit? See Release Notes Yocto Machine Config table for kit part numbers.

The setup is complete and you now have everything to complete a build. This BSP has been tested with the fsl-image-validation-imx image. It is suggested that you start with this image to verify functionality before building other images. Alternate images are located in various meta layers at meta*/recipes*/images/*.bb. They can be found using the command bitbake-layers show-recipes "*-image*" in $YOCTO_DIR/build/.

See Release Notes for supported Yocto machine configurations, and replace <Yocto Machine> below with the appropriate machine for your hardware.

All images generated by bitbake are deployed to $YOCTO_DIR/build/tmp/deploy/images/<Yocto Machine>:

Note that v4.9.11-phy<X> and v2017.03-phy<X> within the paths pertain to the release tag for the linux and u-boot sources. This matches the value of RELEASE_VER for the corresponding recipes in meta-phytec-fsl. For example, for release PD18.2.0 the kernel tag is v4.9.11-phy3.